An Evening Sail on the America’s Cup Yacht America

Last week I took an evening sail in Seattle on the Yacht America, a replica of the boat that won the trophy that would become know as the America’s Cup.

The wind in Elliot Bay was nice with 8 to 10 knots at West Point, moving America smartly along at 8 to 9 knots on a bit of a reach over to Bainbridge Island and back, the water was flat for a very nice trip.

The weather was a bit chilly on the water and a few people did not bring coats, the crew of America were gracious hosts and got out spare blankets for the guests to wear.

As with many ships of this type the guests became the crew (the adventure, historic ambiance and team building I am told) when it was time to raise the sails, with a main mast of 105 feet and setting 5,900 square feet of sail in four sails, it takes a lot of work to raise the sails.  If the weather is right guests are invited to drive the boat if they want.  Several stepped up and got to drive the America under the watchful eye of Captain Troy.  The calm guidance of Captain Troy was great given the look of concentration or terror at times on the face of those that drove the boat.

The Yacht America built in 1995 is a replica of the original yacht America that won the 100 Guinea Cup in 1851 from the Royal Yacht Squadron, which has became known as The America’s Cup.  That win marked the start of the longest winning streak in sports, 132 years, until the New York Yacht Club lost the cup to Australia II in 1983.

I have also sailed on the Schooner Adventuress which is home ported in Port Townsend here in Puget Sound so I wanted to contrast the two ships a bit since they are both historic tall ships.

The Yacht America is a replica with a few changes and upgrades, the beam is two feet wider for more room below for guests and the interior is finished to a very high standard with a full galley (kitchen) and a main dining room for banquets up to 16 people.  The crew quarters were updated for more comfort and privacy.  Twin diesels also a safety upgrade to allow America to get in and out of harbors easier and safer and to motor on days when the wind is absent or in weather where sailing might be hazardous.  The hull is Oregon Cedar strip construction sheathed with fiberglass, this is the same construction used today on many high-end custom race boats.  Someone in a Tux would be right at home on America.

Today the America spends it’s time doing whale watching trips in San Diego, educating people about the ocean, America’s Cup history and is now a roving ambassador for the 35th defense of the America’s Cup.  This year it is touring the West Coast and doing the Caribbean and East Coast of the U.S. in 2016 teaching the history of The America’s Cup.

The Schooner Adventuress built in 1913 as a research vessel for a scientific expedition to the Arctic to get a specimen of a Bowhead whale.  They did not get a whale, but did complete a very important survey of the Pribilof Islands fur seal population.  She then spent 35 years as a pilot-boat for the San Francisco Bar Pilots Association.

The Adventuress came to Puget Sound around 1960, named a National Historic Landmark in 1989 and is now owned by Sound Experience on behalf of the people in Puget Sound.

The Adventuress was built as a working boat and still shows the heritage.  The Adventuress has more period touches such as Baggywrinkle for sail chafe prevention, Thump Mats and Rope Fenders.  Someone in a Tux on the Adventuress, would lets just say they would stand out a bit.

The crew was quite surprised when I knew what a Ballantine Coil was and how to coil it (a coiling method used on tall ships to coil halyards that can be several hundred feet long so the halyard will run free when the sail is dropped).

UPDATE August 18, 2015: Had a chance to attend Troy’s talk on The Americas Cup. Part history, part where things are going, how Oracle came back in the last cup, why the next cup defense will be in Bermuda.  Troy is a true insider who brings a very lively view and presentation.  Don’t miss it!  Something for everyone from the casual cup folks like myself to the folks that think they know every last detail.

1850’s period sidelights matched with horns that look like they came off a Mack Truck, I found the contrast interesting

Nice turned stanchion, boo hiss for the bits of green on the Bronze Mounts 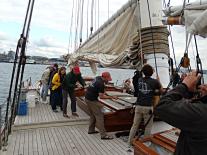 Getting ready to raise the main sail, the Yacht America like many tour vessels makes the guests do the hard work, something about team building and reliving the ambiance of old 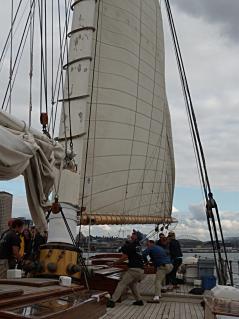 The main is almost up their folks, pull just a bit harder!!

The second sail is finally up

All the sails pulling, about 9 knots reaching a bit in Elliot Bay toward Bainbridge Island

105 feet to the top of the main mast, and I get nose bleed on a step stool, maybe not my calling in life up there

Lacing the foot of the sail to the boom 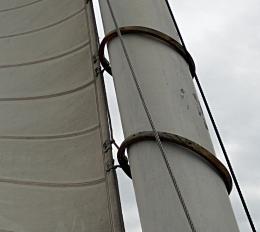 Hoops are used to attach the sail to the mast. The masts on America are quite large.

Another view of the Dorade 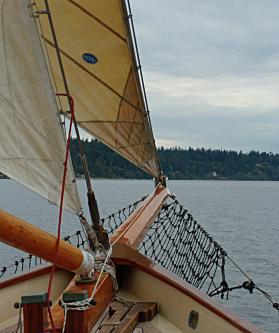 Bainbridge Island framed off the port side of the Yacht America 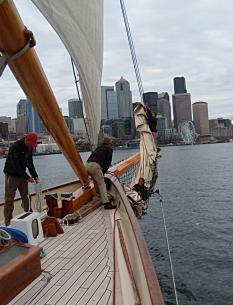 Dropping the sails on a Tall Ship like the America is a bit of a job, here a crew member climbs up onto the boom to control the leach of the sail and flake it as the sail comes down

The luff of the sail also requires extra effort to flake

This entry was posted in History and tagged marine tradition, Seattle, traditional skills. Bookmark the permalink.