Sailing in Seattle on the Schooner Adventuress 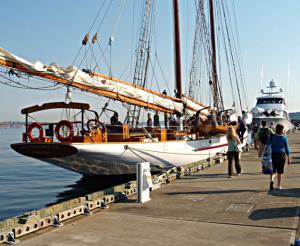 The Schooner Adventuress waiting at the dock for us to board

Last fall I had a chance to sail on the Schooner Adventuress when the Mountaineers Sailing Group chartered it for an evening sail and potluck in Elliot Bay. Here are some of my observations and a few pictures from that trip.

2013 marks the 100 birthday of the grand old lady, she was designed by B. B. Crowninshield and built by the Rice Brothers Shipyard in East Boothbay, Main.

Sailing on the Adventuress is a bit different than a regular recreational sail boat. First there is the size and weight. The Adventuress Length on the deck is 101 feet and 133 feet overall with a 21 foot beam with a rig height of 110 feet (this means the main Halyard is something over 460 feet long as it uses a 4:1 block and tackle system on the main halyard, making coiling the halyards a real chore).

Sailing on the Adventuress is a hands on experience, you can help raise the sails (no winches here) just like it was done when the Schooner Adventuress was first launched 100 years ago you can also, help with Tacking, coiling lines and steer the ship if you want, or you can just sit back and breath in 100 years of history and tour the ship. 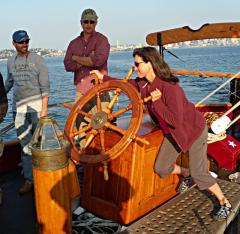 Several people got to steer the ship, Demeree found out that driving the Adventuress through a tack was a lot harder than on a Catalina 42. Almost everyone got to help raise the sails or help with the sheets during a tack. Marie had heard about using the Ballantine Coil to coil the halyards, so she got a chance to coil one of the halyards using the Ballantine Coil. The staff kept up a running commentary on the history of the ship and the environmental programs the ship is involved with.

The Adventuress was built for a scientific expedition to the Arctic to get a Bowhead whale specimen to complete the exhibit for the American Museum of Natural History in New York. They did not get the whale but an important study of the Pribilof Islands fur seal population was done.

The Adventuress was then sold to the San Francisco Bar Pilots Association where she entered service in 1915 as a pilot boat, where she remained in service for 35 years.

The Adventuress was brought to Seattle around 1960 by O. H. “Doc” Freeman, the founder of Doc Freeman’s the Chandlery that bore his name for many decades on North Lake Union. After a couple of owners, Youth Adventures was founded by Monty Morton and sail training was started for youths. In 1962 Ernestine Bennett found the Adventuress and a new challenge. She became more involved in the sail-training program and became the head of Youth Adventures in 1974. In 1989 the Adventuress was named a National Historic Landmark.

In 1991 Sound Experience purchased the Adventures on behalf of the people of Puget Sound and has continued and expanded the Youth and other programs. Their programs now run from April through October. Around 3,000 people now sail aboard the Adventuress each year to learn more about the history of the ship and Puget Sound.

There are many ways available if you want to sail on the Schooner Adventuress. They have several different multi-day classes for teens and up as well as shorter sails. Opportunities to get on the Adventuress range from free at the dock tours, day and evening sails open to the public, you can become a supporting member and help move the boat, your group can charter the Schooner Adventuress for anything from just a leisurely trip to a team building trip. Please check their web site for a trip leaving near you or for a class in the San Juan’s. As with all non-profits they are always looking for help to support their efforts to preserve history and raise environmental awareness.

A special thanks to the Captain & Crew for a very enjoyable evening sail and history lesson, the fresh cooked brownies were great also. 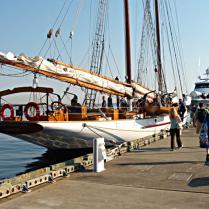 The Schooner Adventurous waiting at the dock for us to board

The Crew going over the safety equipment before leaving the dock

While the crew moved the Schooner Adventuress from the dock we got a history lecture about the 100 year old lady. By moving us all over to the side away from the dock and requiring us to sit on the deck, the sight lines were cleared for the captain & crew and we were out of the way of the line handlers.

Even at 4:1 mechanical advantage the main halyard took many hands to raise the main sail

Traditional hand working on one of the sails 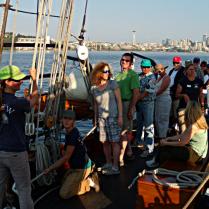 Preparing to raise the main sail on the Schooner Adventuress 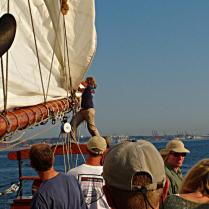 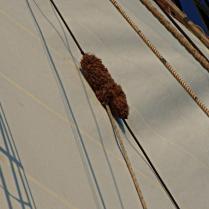 Baggywrinkle on the Schooner Adventuress. Baggywrinkle is a traditional anti-chafing method.

Marie using the Ballantine Coil to coil one of the halyards.

As we sailed, the staff kept up a narrative on the marine environment and about some of the projects and classes they had on the Schooner Adventuress. They have a youth program with a very strong environmental element. 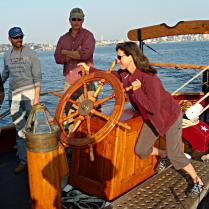 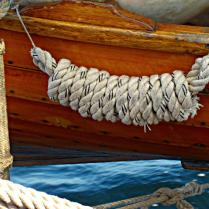 Another style rope fender on the Schooner Adventuress

One of the crew on the Schooner Adventuress tying the sail to the bow sprit.

Sail tie made from three strand line on the Schooner Adventuress. The line is doubled and the strands separated out and them braided back together with a six strand flat braid.

3 Responses to Sailing in Seattle on the Schooner Adventuress