Coiling line using the Ballantine Coil on the Adventuress 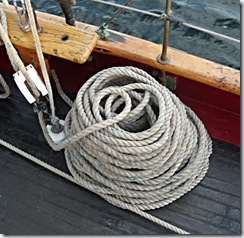 Line coiled with a Ballantine Coil on the Schooner Adventuress

On a recent evening sail with the Mountaineers Sailing Group aboard the Schooner Adventuress (Wikipedia, Adventuress Web Site) I saw the crew using the Ballantine Coil to coil the halyards when a sail is raised. With masts that rise over 100 feet above the water and using a multi-part halyard the halyards are quite long requiring very careful coiling to keep the lines organized so they will run free if needed and not become tangled.The Ballantine Coil builds a stable coil that is compact and with the coils in the center both helping with stability the center coils also use more line length for the coil height than just a plain coil that I have seen in the past.

The sails are raised by hand without a winch by lining the crew (and anyone that want to help) up in a line and pulling lines while chanting an ancient sailing shanty and all pulling as a team. The actions reminded me of a tug of war except the object was to raise a sail and not pull the other team into the creek. The sheets for the sails are also handled by hand. I did not see any winches for sail handling.

In addition to the hands on getting everyone involved with the sail handling, the crew also did a short class on navigation showing how to find where the boat was using a compass, chart and traditional instruments (no GPS chart plotter!). The navigation class was well attended and the people in the class had a great time.

Many of the line handling activities were coordinated with chants in some foreign sounding language, I’ve never been much into the foreign chants so when I was helping with one of the lines, things went better after I convinced the crew to just point when they wanted me to work on tightening the line (using the old technique I learned back on the farm as a kid, throw my weight forward pushing the line sideways then reversing the direction and using my weight and momentum pull the line sideways and down then the slack was taken out of the line by the crew member, worked well, ended up with the line tighter than they wanted and it had to be eased for proper sail trim.)

With a Gaff-rigged sail plan of 5,478 square feet (509 square meters) there is lots of opportunity for helping with the sail and line handling.

The Mountaineers Sailing group chartered the Adventuress and had a great time on the evening / sunset sail in Elliot Bay which included a potluck and a treat of some incredible cookies from the cook on the Adventuress (a rich chocolate thing that was so light and fluffy).

Thanks to the Captain, the Chief Mate Nora and the Crew for patiently answering my many questions about the operation of the vessel and some of the traditional methods I observed.

What am I going to do with my new found skill? Not sure, as I don’t think the Ballantine Coil would work well on a small recreational sailboat using double braid lines. But I could not resist passing this on, I will find a use for it sooner or later.

A special thanks to Zach from the Adventuress who graciously corrected my very poor hearing, I thought I heard “valentine” when I was on the vessel but Zach corrected me with the correct term “Ballantine” he said that he had also seen it spelled “ballentine” and “ballantine,” but always with the B.    So again thanks Zach for the help.