Chafe Protection – Or keeping your boat tied up in a storm

What can happen if proper chafe protection is not used

As the fall storms and winds increase, chafe protection on mooring lines is often overlooked until a line parts or breaks.

Lines should be protected anytime they go over or around a sharp or abrasive object.

Chafe is increased anytime a line passes over a rough spot, inspect all line contact areas for rough, abraded areas, nicks, scratches, or groves.  In some cases edges can be rounded or relieved to help reduce chafe.

Commercial chafe protection and gear comes in almost infinite choices or you can make your own chafe guard without too much difficulty.

Woven Polyester Tubes for Chafe Protection, upper tube has hook and loop fasteners so it can be wrapped around the line anywhere, the lower tube is a continuous tube and needs to be slid on the line from one end.

Woven Polyester tubes are a popular option at almost any marine supply store and come in a variety of sizes.  Most come with holes punched in each end and tie-wraps to secure the tube to the line.  The Polyester tubes also come with Loop and Hook fasteners (Velcro) that make it easier to put in the middle of the line.

For the traditionalists out there, leather works well and it more “nautical” in many people’s eyes.

A short piece of old garden or water hose will work well.  cut to length and attach to the line.  A couple of holes punched or drilled in each end will make it easier to secure the hose to the line.  I have also seen some hose / line combinations that were snug enough the hose did not want to move on the line even without being tied to the line.

Some people like old fire hose, check with surplus stores or with your local fire department, they might have some old hose to give away or a surplus outlet where old hose can be purchased.

The hose can also be split lengthwise to make it easier to slip over the hose.  Be sure to secure the hose securely and add a bit of tape to help insure the line does not slip out where the line is split.

Canvas or other heavy cloth wrapped around a line works well also, wrap the cover around the line and fasten the cover to the line.  A Constrictor Knot or Double Constrictor Knot works well to attach the cover.  Use some small stuff and fasten in several locations.  Don’t have canvas?  Most anything will help from towels, heavy shirts or even some Denim cut from an old pair of pants.

A bit tough to see, this is the chafing abrasion from about two years of the eye being looped over one of my winches.  Since I change the mooring lines every two years, I decided that adding chaffing gear was not required as I would change the line well before it became a safety issue. 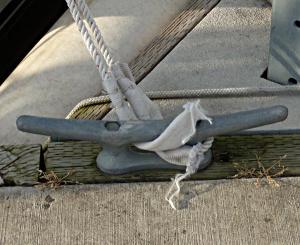 Chafe protection for the center of a cleat

Cleats: If the eye of a line passes through the center of a cleat, make sure to check the center of the cleat for rough spots or sharp edges.

Cleat installed at the edge to reduce chafe

Some manufactures deal with chafe by moving the cleats to the edge of the boat so the line has less to rub against.

With a cleat close to the edge, the distance between the cleat and any rub points are reduced, with less distance for the line to stretch, the movement of the line over any points of contact is reduced and that reduces the chafe.

Chafe Protection can also be needed for the boat not just mooring lines, lines can wear through fiberglass or wood in a short time.  A friend went to lunch on a friends boat.  Things were a bit windy but they made it to the pier at the restaurant, they tied up the boat and went to lunch.  When they came back from lunch, the mooring line had cut a groove into a wood rail on the boat.  So be careful of the lead of a line and protect vulnerable parts of your boat with metal strips or other proper protection.

Remember your anchor rode and mooring buoy.  They should also have proper chafe protection.

Some people take the cover off Dacron / Polyester line and use the cover as chafe protection on lines.  Some companies sell just the outer covering with no core for chafe and heat protection of lines.

When changing from wire to rope halyards inspect all contact areas very carefully as wire can wear groves and leave rough spots that can devastate synthetic line in short order.

My awareness of chafe was raised quite a bit when I moved from a dingy to a keel boat.   When I moved to my own slip I found the twin bow lines (1/2 inch three strand nylon) on a light boat (26 ft J/80)) gave a real jerky motion when the boat came to the end of the lines, this made standing on the boat in the slip a bit annoying.  So I changed to 3/8 line, a bit undersized, but with two lines in a slip protected by a lot of other sailboats I thought this would be fine.  The motion when the boat came to the end of the mooring lines was much gentler.   But after a couple of weeks I noticed the two bow lines were starting to chafe when the larger lines had not.  I added a Dacron / Polyester tubing to the dock lines and the chafe issue went away, used the same lines for a couple of years before the sun baked them and I replaced them.  The smaller lines while giving a much easier motion in the slip was stretching and moving over the chock, the chock was a standard chock, but the extra stretch caused a chafe issue.  I was quite happy that I changed the mooring lines during a time when I was sailing the boat every week, so I noticed the chafe before the line parted.

In extreme weather conditions I have seen reports that chafe coverings that allowed water to pass through to the line, let the water serve as a coolant and lubricant, some people reporting their boat survived when other boats with chafe protection that did not allow the cooling and lubrication did not.  Note: since I was not there I can’t tell if the lines were equal with just the chafe protection being different, but the lubrication and cooling makes sense to me.  If you live in hurricane alley or expect similar conditions extra research on what has and has not worked in the past is in order.

Sampson Rope has a nice brochure on Chafe Protection (PDF 2MB), for their compete line of products visit their Brochure and Catalog page.  I also highly recommend their Rope Users Manual for anyone using rope (lines on a boat) as a great resource.

Thanks for your interest in and support of boating safety