After I did an article on using the Spar Hitch to tie fenders a friend Lee told me about a similar knot that he uses for fenders and storing lines on a boat.

This is similar to what Ashley calls a Backhand Hitch (knot # 1852 in The Ashley Book of Knots) except the Half Hitch is tied in the opposite direction and this reversal seems to make the knot more secure.  Ashley also shows the Backhand Hitch as being tied with two Half Hitches to finish it off.

Lee was taught this knot/hitch on a Rob & Teressa’s Baba 40 on the Baha Haha, many years ago. Rob took him aside and showed him this knot and explained this was the only knot allowed for storing lines. He wanted a standard knot, so in the middle of the night, when things were not going well, he did not need to figure out, what the person ahead of him did. It is quick to tie and holds well even on small diameter objects.

Thanks to Lee Youngblood for the tip on this knot.  Lee is a long time friend,  experienced sailor and Yacht Broker.

The Spar Hitch is another handy knot you might find useful to help prevent the loss of fenders.  The Spar Hitch holds well on small diameter objects that are slick, it is also quick to tie and be tied “slippery.” 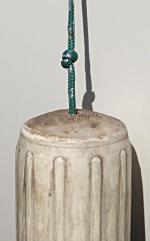 Fender Whip for fenders with a hole in the center

An improved Fender Whip – Part 1  to tie a fender to your boat that holds knots much better than a standard Fender Whip, for fenders that have a hole down through the center to run the fender whip.

Improved Fender Whip for fenders with an eye

An improved Fender Whip – Part 2  to tie a fender to your boat that holds knots much better than a standard Fender Whip, for fenders that have an eye or tab on the end for the fender whip.

Three stopper knots for your boat

Three Stopper Knots : How to tie three different stopper knots for use on your boat.