A Luncheon Cruise & Tour on the Coast Guard Icebreaker Healy

Last Saturday I had the honor of an Elliot Bay lunch cruise on the USCG Icebreaker Healy which is home-ported in Seattle.

This was a special trip set up to let the family and friends of the crew on the Icebreaker Healy to see the Healy and find out a bit more about the ship, it’s proud history and the many varied missions it has performed over it’s 14 plus years of service.  The trip also served as a short shakedown cruise as the crew has been doing some major work to get the Healy ready for deployment to the Arctic this summer.

The trip was a real surprise, we had a Coast Guard Auxiliary meeting scheduled at the base in the morning but not many people showed up.  A few of the Auxiliary had already been invited aboard the Healy for the day.  The Division Two Vice Commander called one of the Healy’s crew to see if he could bring a few more people aboard for the trip, while the request was working up to the proper channels, we sort of showed up at the gang plank with a request of “table with a view for 10, sorry we don’t have reservations.”  The two very nice Healy crew members that were checking the reservations at the gangplank replied to the effect, “sorry no tables, but some great views are available and lots of room, your names please” and with that we were directed aboard and to the flight deck for the pre-departure safety lecture.

A few “fun facts” I found interesting about the boat:

The Healy is named in honor of the legendary Captain “Hell Roaring” Michael Healy (CG Bio & reference links – Second Bio).  Captain Healy was the United States to those living in Alaska for his two decades of service in Alaska for the Coast Guard (then the Revenue Cutter Service) at the end of the 19th century.  Captain Healy and his crew acted as judge, policeman and doctor for whaling crews, merchant seamen, Alaskan Natives and settlers, suppressing illegal trade, protecting natural resources, supplying remote outposts and providing the ever important Search and Rescue services to those in trouble.  Captain Healy served in the Revenue Cutter Service for 39 years.

Watching the crew in the Pilothouse work together while underway was a marvelous exercise in teamwork and masterful situational awareness, NOTHING escaped the lookouts and the helm team.  They made it all look so easy.  We were not allowed in the Pilothouse while leaving or returning to the Pier.  Leaving and returning to the Pier was an exercise in watching calm, cool & smooth, no excitement, everyone knew their job and was ready to do their jobs.

One of the anchors was ready for immediate release in the very off chance that something major went wrong with the ship during the trip, the second anchor was ready for release with just a few moments of prep,  this is example of the “just in case” preparation that the Coast Guard does as standard operating procedure.

The Healy was designed for research as well as breaking ice with accommodations and work space for 51 Scientists and Technicians.

A special thanks to the Commanding Officer of the Healy, Captain John Reeves and his entire crew for making the trip possible and the great burger BBQ on the flight deck.  Also thanks to FN Rebecca Molinari for inviting the Auxiliary and giving us a tour of the ship including the machinery areas.

Home web page for the Healy. 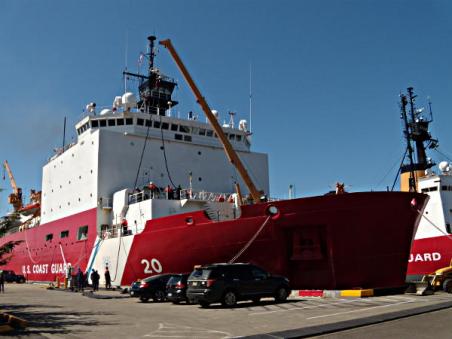 Casting off the mooring lines for the Coast Guard Icebreaker Healy from Pier 36 in Seattle on the way to a training and lunch cruise in Elliot Bay.

Leaving Pier 36 with great caution, the line handlers have straightened the lines out and made them ready for when we return to the Pier 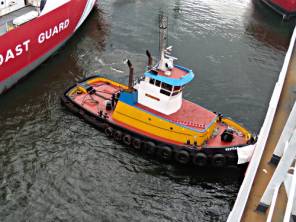 Two tugs helped the Healy leave Pier 36 in Seattle, note the “large” clearance to the stern or the tug. About 6 feet behind the tug, a very coordinated dance to leave the pier.

View off the stern of the Healy, looking at Harbor Island and Alki while leaving Pier 36 in Seattle. 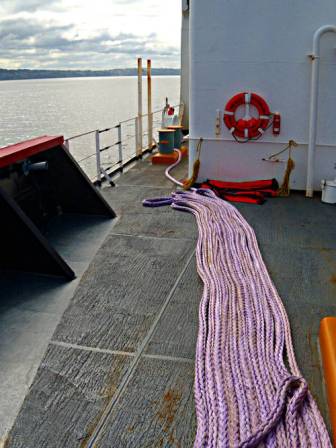 The lines were all faked with care, ready for our return to the Coast Guard Base at Pier 36 in Seattle.

Heaving lines attached to the mooring lines, ready for use. 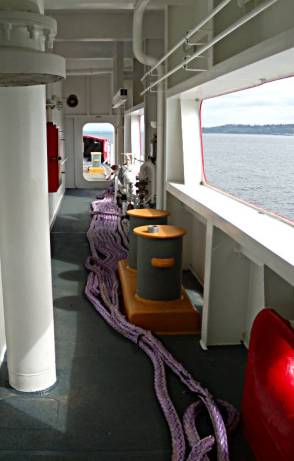 More mooring lines faked with care on the Icebreaker Healy

Anchor chain / rode and capstan. For scale, that is a standard baseball cap. The capstan is used for the mooring lines.

The Space Needle, in downtown Seattle on the Starboard side of the Healy as seen from Elliot Bay. 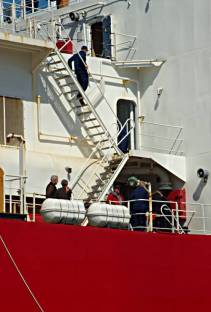 Stairs stairs every where, seemed like we could not go anywhere on the Healy without going up or down stairs. 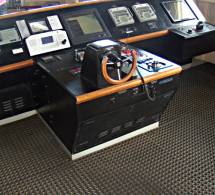 One of several steering stations on the Healy, this is the Starboard station in the Pilothouse.

Even with all the electronics on board, the Healy still has paper charts and traditional plotting tools ready for immediate use. Our course was plotted on the paper chart. 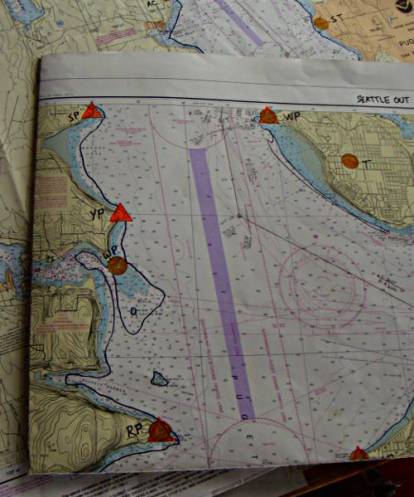 The paper charts had the Aids to Navigation highlighted so they could be easily found on the chart. There was also a heavy black line around the edge of the water marking where the Healy should not go. 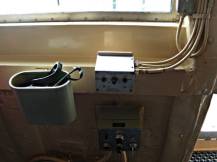 The upper box is the control for the windshield wipers. They really should have the switches guarded better, no don’t ask me how I came to that conclusion.

One of the generators providing ships power.

One of the Healy’s main ships power panel. Lots of switches that we were cautioned not to touch or flip. 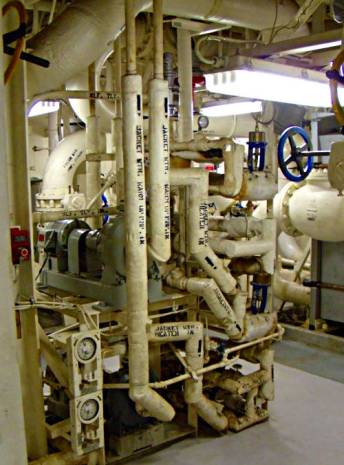 Piping piping everywhere on the Healy.

More piping and valves on the Healy. 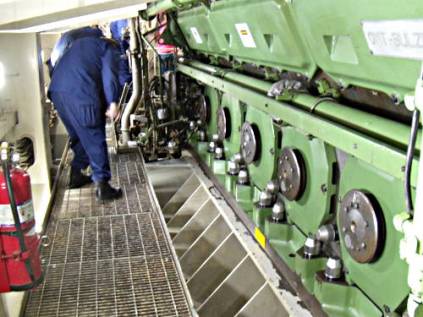 Bit of a low overhead alongside one of the 4 Sulzer 12Z AU40S medium speed, 10,620 BHP engines. Each engine drove it’s matching generator to provide electricity for the drive motors. 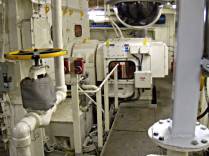 The front of a 11.2 MW (15,000 HP) AC Synchronous motor which was attached directly to the propeller shaft. The Healy has two shafts, the propeller shafts are direct drive, no reduction gear, the motor is reversed to drive the Healy in reverse or stop the Healy.

The propeller shaft where it exits the Healy, the shaft seal is to the left with water on the other side of the seal.

There were many shops on the Healy. When you are a long ways from a machine shop you need to be self sufficient, and since the Healy operates in a very harsh environment, taking good care of the equipment is very very important. 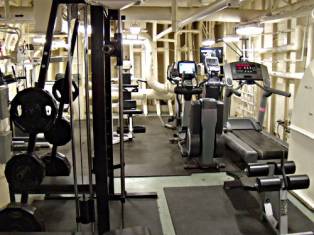 One of two workout / weight rooms on the Healy. The Coast Guard has annual physical requirements so they need to be in good shape to do and keep their jobs. 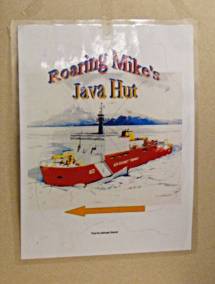 Yes even get your Latte, I guess appropriate for a ship home ported in Seattle.

View off the stern of the Healy looking north, what a great day for a cruise.

The A frame at the stern. The A frame pivots aft and out for launching research instruments. The Healy can deploy and retrieve instruments up to 5,000 meters (16,400 feet) down.

The towing bit is about 20 inches in diameter. 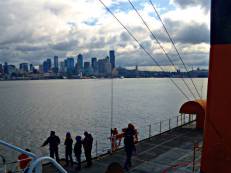 Downtown Seattle off the Starboard flight deck on the Healy.

Point Wells, off the Starboard side of the Healy, just south of Edmonds. 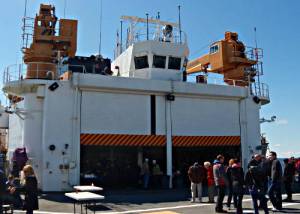 The helicopter hanger, when not being used for serving burgers for guests, the hanger on the Healy can accommodate (2) MH-65 Dolphin or (1)MH-65 + (1) MH-60J Jayhawk helicopters. 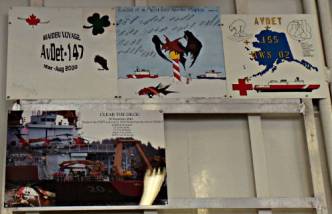 A tradition on many vessels is to have some sort of artwork to commemorate missions, this is in the helicopter hanger.

Commemorating more missions by the Healy.

Commemorating more missions by the Healy. 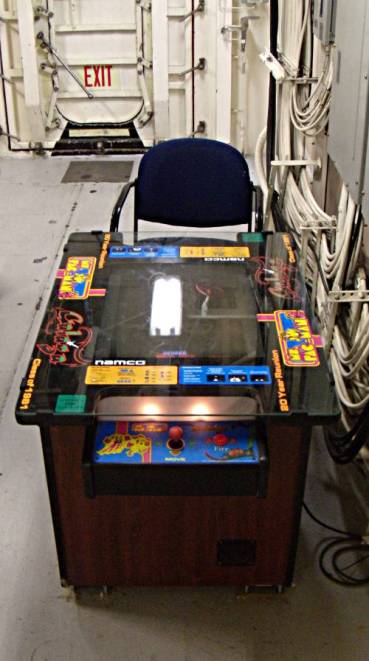 Packman game just outside the laundry room, NO quarters required.

Plan of the day for the Healy

A bit of fun poked at the Auxiliary in the Plan of the Day. The Coasties got a bit more of a chuckle when they noticed that I was wearing a life jacket.

Just some of the electronics on board the Healy. Internet access and satellite TV, as one of the crew said, two VERY important items.

Safety first on the Healy, nets to keep someone from slipping overboard through a fairlead.

Downtown Seattle off the port bow of the Healy in Elliot Bay. 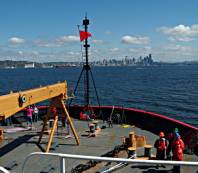 The Healy approaching it’s slip at Pier 36 in Seattle. How do you approach a Pier with a ship the size of the Healy? Very carefully, the crew and the tugs made things look so easy, no excitement at all.

The Healy approaching it’s home port in Seattle at the Coast Guard Base at Pier 36.

Two of the many mooring lines for the Healy, all of which were stored very neatly.

The Healy back at it’s slip at the Coast Guard base at Pier 36 in Seattle.

Thanks for your interest in and support of boating safety

This entry was posted in Aux Activities, History and tagged icebreaker healy, Seattle. Bookmark the permalink.