Let There Be Light – Testing the Streamlight Siege LED Lantern 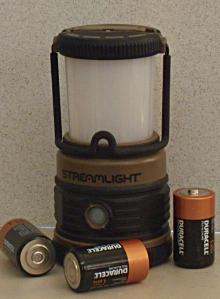 I have used the Streamlight Siege LED Lantern for several months and have been quite impressed by it.

For boaters, the Lantern floats, has multiple light levels, should survive a 2 meter (6 foot) drop), has a nice handle to hang the light from a lifeline or similar object and D rings on the top and bottom of the lantern for hanging the lantern from the overhead.  If the lantern is hung from the lifeline, putting a cord on the lantern is prudent.

It has three white light levels, high being bright enough to read with and low lasting near forever.  There is also a very low-level red light that helps preserve night vision or give a low-level mood lighting.  The low red level should not wake a second person up at night when turned on.

The lantern is about 7 1/2 inches tall with the handle down and just over 3 3/4 inches in diameter.

The Streamlight Siege LED Lantern uses three D size batteries.  For moving around in a room or cabin at night I find the lowest level more than adequate.  The light has a push button switch that doubles as a battery life indicator so the batteries will not run down with no warning.  Green for fresh, yellow then red when the batteries are low.  When the batteries are very low, the button blinks red, but the lantern still keeps on putting out light even when the batteries are too worn out to show any life on a battery tester (all three cells total less than 2.3 volts open-circuit).

The frosted globe is removable, and the lantern hung upside down with most of the light shining down.

Other features, recessed light switch indicator to help prevent accidental operation, frosted globe white to give diffused light, the rubber-covered handle folds down and locks against the body of the lantern for easy storage, and locks in the up position also.

The long-lasting battery life with the lantern producing light from 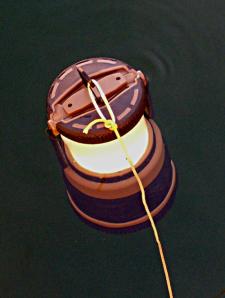 Yes the Streamlight Siege LED Lantern does float, sorry the picture does not look exactly like it is floating.

batteries that are all but dead, make this a good emergency survival light as you will not have the light suddenly go dark.  I have tested other Streamlight lights, the 2AA LED for instance give 15 hours of full brightness light, then as the batteries go completely into the dead zone, it goes into a “Moon Mode” where it keeps on putting out a low-level of light, I gave up on the Moon Mode test around 40 hours, it looks like the Siege Lantern has the same characteristics.  The status indicator has been blinking red for several days now and the lantern seems to keep on running being used for an hour or more every night.

I did not drop test the lantern, but the outside is rubber cased for shock absorbing on the edges, the rubber also provides non-skid when sitting on a surface and makes it easy to handle.

I loaned a lantern to live aboard friends Lee & Kathleen, Lee’s short reaction was they really liked the lantern, worked great on their 35 ft sailboat, plenty of light for the main cabin and the lantern was a great addition to their camping gear.

I did not double-check the claimed run times for the light levels, but my experience with other Streamlight lights are that the numbers should be accurate.

Feature that does not make much sense: The Red S.O.S, it is at a very low-level, so the red color would not be very visible.  Much better I think to have a brighter white light that is visible from a longer distance.  If the S.O.S. was in the low white setting, the lantern would still flash for about 500 hours (over 20 days) continuous and be visible from a greater distance.

UPDATE December 3, 2017: Streamlight has updated the Siege Lantern with more light but the same run times!  High is now 540 Lumens, Medium is now 275 Lumens and Low is now 55 Lumens.  The Red light level stays the same at 10 Lumens.  Until the old stocks are sold out be sure and check to see if you are getting the old or new version. 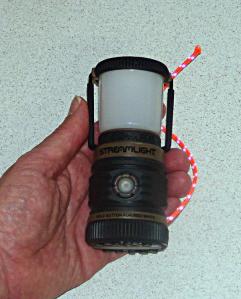 UPDATE OCTOBER 15, 2015: Streamlight has came out with a smaller version, I refer to it as the “Munchkin” sized Siege Lantern, uses three AA batteries.  About 5 1/2 inches tall and 2 1/2 inches in diameter.  It has a bit less light and does not run as long as the Three D cell version.  The low level is a bit brighter than the low of the larger light and runs about 70 hours.  High is about 60% of the larger Streamlight Siege Lantern and runs for about seven hours at that level.  Medium is 100 lumens and runs for about 15 hours, there is also a very low level red light that runs for 190 hours and seems to be popular with amateur astronomers as the light is low enough to not disturb their night vision at all.

The Streamlight Siege Three AA is smaller and lighter lantern that might appeal to hikers, it also makes an great emergency light and is small enough to fit in the corner of a drawer at home or on your boat.  If it is used only as an emergency light, please store the batteries in a Ziploc or similar bag as it is very easy to forget to change the batteries and have them leak and ruin a light.

I used it this last summer as a light in the cockpit when having picnics after dark.  The cord in the picture was hung from a bottom fastener on the sail cover and the low level gave us a nice amount of light to eat by and was not so bright as to be annoying or ruin the peaceful mood.  They have also added a version that has magnets on the base for sticking to a flat magnetic surface.

I would like to thank Lee Youngblood, long time friend, sailor, Yacht Broker and photographer for giving the larger Three D cell light a try & test, he likes the light so well I think I will have trouble getting the light back, guess it’s nice that I bought two of these.