Catch Block on the forward hatch before repairing

The Catch Blocks on the forward hatch needed repair after the Pop-Rivets came loose.

I thought about using Pop-Rivets like the original catch blocks were mounted with.  However getting the Pop-Rivets to seat in the counter bore looked to be a problem and I wanted a repair that I never needed to do again.

I decided to replace the 1/8 inch Pop-Rivets with 6-32 stainless steel machine screws.  The 6-32 screws just slipped into the existing rivet holes and the head of the screw fit into the countersink.  The length was just long enough to go through the frame and allow for a hex nut without protruding past the outside of the mounting frame.

The back of the Catch Block was roughed up with coarse sandpaper to remove the shiny finish to provide some “tooth” for the epoxy to grab onto.

A piece of 3/4 oz. Fiberglass mat was cut to just smaller than the back of the Catch Block.  The mat was to help prevent all the epoxy from squeezing out of the joint.  If all the epoxy squeezes out the epoxy joint will be starved and very weak.

I used West System G/flex Epoxy.  It’s claim to fame is being able to cope with expansion & contraction.  The aluminum and plastic have different expansion amounts so a bit of flex in the joint would be good.

The aluminum frame and the back of the catch block were cleaned and degreased well.  Masking tape was placed on the frame just outside the area covered by the Catch Block to keep the epoxy from making a large mess. 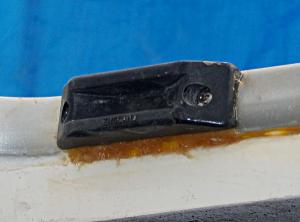 Repaired Catch Block on the forward hatch after 18 months. Bit sloppy with the epoxy.

Epoxy was then applied to the back of the catch block and the fiberglass mat was placed into the epoxy and the mat was saturated with epoxy.

A bit of epoxy was applied to the screws as I wanted the screws to be insulated from the aluminum frame and also for the epoxy to make a solid rivet to help reduce any chance of movement of the Catch Block.

The screws were snugged down with the nuts, but not enough to force all the epoxy out of the joint.  The epoxy was formed to form a fillet and the mess was cleaned up and the masking tape removed and the epoxy was allowed to cure.

After 18 months or so the Catch Blocks are still fastened well.