Posted on September 8, 2020 by captnmike 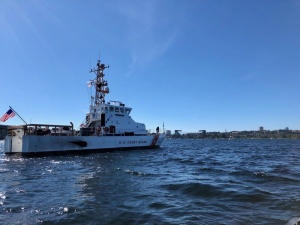 The U.S.Coast Guard is charged with safety on Federal Navigable Waters among their many areas of responsibilities. Boats carrying passengers for hire are required to have licensed Masters/Captains in charge and onboard. This is to help keep passengers safe. The lowest level of licensing that would be required for Masters in charge of 100 Gross tons or less is a significant task. When I earned my 50 ton Coast Guard License, I went to school and spent about 100 hours class then add about 200 hours studying. I had to document 365 days on the water and pass a tough exam. For instance the Rules of the road part of the exam is 50 question, closed book with passing being 90%, for added challenge sometimes 3 of the answers are almost correct with a very small technical difference between the almost correct and the proper answer. The exam is difficult and designed to weed out those who are not qualified.

Below is part of a press release from District 13 here in Seattle and the 11th District Pacific Southwest regarding their recent enforcement of illegal charters in their areas and some of the penalties for those operating an illegal charter.

The Coast Guard is always on the lookout for unsafe operation as well as illegal charters.

The Coast Guard will aggressively pursue any operator who is putting their customers at risk by operating outside these critical safety requirements. The Coast Guard urges anyone paying for a trip on a passenger vessel to ask to see the Merchant Mariner Credential of the vessel operator to verify their captain is properly credentialed by the Coast Guard.

While on patrol, a Coast Guard Station Seattle 29-foot Response Boat Small crew observed one vessel transiting out of a local marina and into the navigable channel of Lake Union. The crew aboard the RBS dispatched a law enforcement team to conduct a boarding and discovered the following violations:

Illegal charters pose a danger to everyone aboard the vessel. Terminating these dangerous operations and educating the boating public is a top priority for the Coast Guard, said Master Chief Petty Officer Kevinn Smith, officer in charge of the 87-foot Cutter Sea Lion. If you suspect an illegal charter, reach out to the Coast Guard on channel 16.

* Owners and operators of illegal charter vessels can face maximum civil penalties of $59,000 for illegal passenger-for-hire operations.
* Charters that violate a captain of the port order can face more than $94,000 in penalties. Some potential fines for illegally operating a charter vessel are:
* Up to $7,710 for failure of operators to be enrolled in a chemical testing program.
* Up to $4,803 for failure to provide a Coast Guard Certificate of Inspection for vessels carrying more than six passengers. As per 46 C.F.R. 176.100
* Up to $16,398 for failure to produce a valid Certificate of Documentation for vessels over 5 gross tons.
* Up to $12,007 for failure to have been issued a valid Stability Letter prior to placing vessel in service with more than six passengers.
* Up to $94,219 for every day of failure to comply with a Captain of the Port order.
* Up to $39,936 for failure to operate a passenger vessel without a Coast
Guard license as per 46 U.S.C. 8906

This entry was posted in Boating Safety, Safety Thoughts, seattle and tagged Seattle. Bookmark the permalink.