As part of the engine re-power I decided to relocate the 120 VAC Electrical Panel to give better access to the engine compartment since the original panel blocked engine maintenance access.

The boat originally came with a custom 120 VAC Electrical Panel located next to the engine compartment, the custom box also held the VHF Radio and Stereo.  The location of the VHF radio made the radio virtually useless unless someone was sitting below and the layout of my boat is not friendly to a remote speaker.

My boat’s 120 VAC system is very simple which made moving the electrical panel easier than on a traditional cruising boat.

I purchased an 8 inch by 8 inch by 4 inch electrical enclosure from Stone Way Electric in Seattle.  I painted the box white to match the color inside the hull in the aft port quarter.  An 8 by 12 inch mounting panel was made from 1/4 inch marine plywood and also painted white.

The mounting panel was mounted to the inside of the hull using Weld Mount 1/4-20 glue on studs so no holes were required to be drilled into the hull. 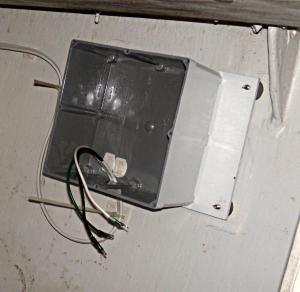 Electrical enclosure showing the mounting panel attached to the inside of the hull and the Weld Mount tie wraps inside and outside the enclosure.

I use the aft quarter area for fender and anchor storage. The fuel tank is translucent and holds about 1 gallon of fuel per inch of height, the ability to see the “fuel gauge” easier will also make fueling safer and easier.

The original enclosure, while looking nice, was 11 inches wide and 12 inches deep. The back of the enclosure overlapped and blocked about 1/3 of the engine access panel.

This entry was posted in Boat Maintenance, Boating Safety and tagged boat equipment. Bookmark the permalink.
%d bloggers like this: